Most economically important traits in crop and horticultural plants are quantitatively inherited, which implies that the control and functions of such traits are specified by many genes, often strongly influenced by environmental factors. Even the more simply inherited traits, such as resistance to disease and insect pests, may be controlled by a single major gene with many modifiers.

NC State scientists have developed much of the quantitative/statistical genetic theory and the field designs for experimentally testing this theory that has been used worldwide. This has been invaluable in the elucidation of the genetic basis of quantitatively inherited traits and the development of selection procedures for the improvement of these traits. In addition, much of the pioneering research that has led to the DNA-based marker-assisted selection techniques used in most crops now and in virtually all commercial crop breeding programs was conducted through cooperative breeding programs of NC State and the USDA-Agricultural Research Service.

A number of scientists at NC State have been involved in basic research studies that have and will continue to strongly impact the efficiency and the ultimate success in the breeding of the next generations of field and horticultural plants. These include studies on the mode of action and the isolation of genes involved in resistance of plants to various disease-producing organisms, studies to develop transformation procedures to create unique transgenic plants with novel traits, and studies to elucidate the molecular basis of traits such as wood formation in forest trees. 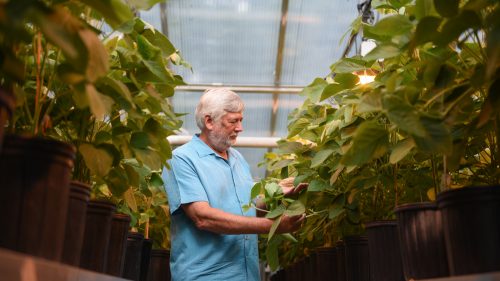 Many of the plant breeders in both field and horticultural crops at NC State have developed unique and sizeable collections of germplasm. These collections are useful not only for maintaining genetic diversity, but also provide sources of genes available for introgression into elite cultivars that may provide resistance to various disease and insect pests as well as sources of genes for novel traits.

Another major strength in this area is the strong emphasis on academic programs, both at the undergraduate and at the graduate levels. In addition to the comprehensive plant breeding courses offered, the excellent supporting courses in genetics, statistics, plant pathology, entomology, plant biology, biochemistry, and other disciplines provide students with broad educational training. Graduate students have the opportunity for both laboratory/biotechnology and field research experiences that prepare them exceptionally well for plant breeding leadership positions both in private and public institutions.